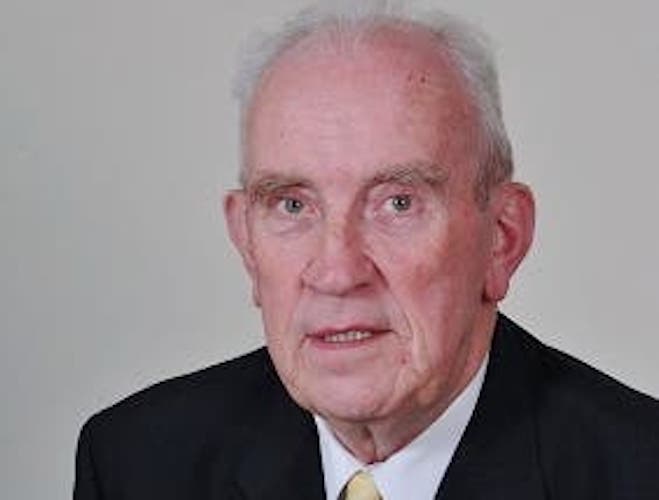 The political stalwart passed away earlier on Tuesday.

Mr O’Kane announced his retirement from local politics in 2014, at the age of 81, having served 32 years on the Council, following his election in 1982.

He was a name “synonymous with local politics in the Strabane district down through the generations,” said Sinn Fein MLA for West Tyrone, Michaela Boyle.

Said Ms Boyle: “I had the privilege of serving with James on Council from 2008-11 and it was clear that James’ motivation was always to improve his local community and passionately fought the corner of all who sought out his help regardless of colour, class or creed.

“I saw this great picture recently of James and the late Ivan Barr looking over the Mourne Bridge. Two of Strabane’s most well-known faces and longest serving public representatives.

“It goes without saying that James will be sorely missed by the people of Strabane. I would like to send my deepest condolences to his family, friends and all who knew him.”

Funeral leaving his home on Wednesday (January 13th) at 7pm to St Mary`s Church, Melmount for Requiem Mass on Thursday (January 14th) at 2pm. Interment afterwards in the adjoining cemetery.

“Sacred Heart of Jesus have mercy on his soul”.

Donations in lieu of flowers please to Dementia N.I. c/o Quigley Funeral Directors, 1A Newtown Place, Strabane. In accordance with current restrictions (re: Coronavirus) the house and funeral will be private to family only please. The Funeral Mass can be viewed live here.