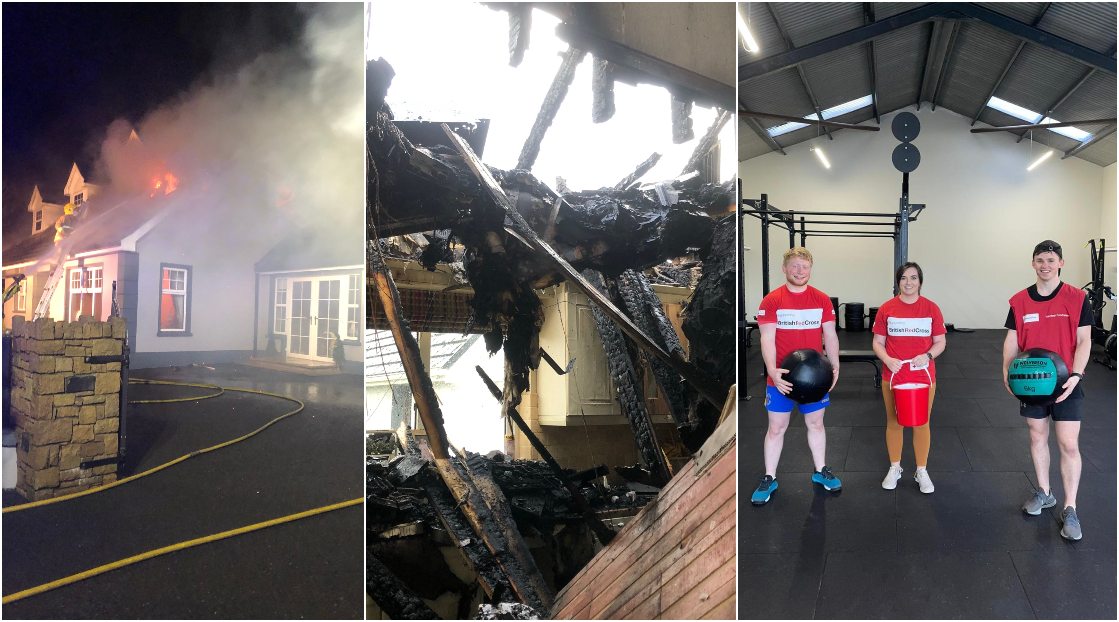 An Omagh woman, who was supported by the British Red Cross after a house fire, has teamed up with three childhood friends to lift weights and raise money as they take on a 24-hour work-out challenge in aid of the charity.

Eimear Donnelly, Francis McConville and James McSorley, all in their early twenties, will be pushing themselves to the limit this Friday, August 20, when they begin a non-stop 24-hour work out relay.

“We wanted to do something a bit different and that people could join in with,” explained Eimear.

“James is opening his new gym and has a whole range of machines so we thought this could be a great way to celebrate his new business and raise money for a worthwhile cause.”

The trio of exercise fanatics, who have known each other since school, will take it in turns to exercise throughout the day and night, with at least one of them pumping iron, pounding the treadmill, or spinning the erg at any given moment.

They’re also encouraging family and friends to join them for sponsored thirty-minute slots throughout.

But aside from the fun of organising the challenge, Eimear has a reason very close to home why she wanted to raise money for the Red Cross. On New Year’s Eve last year, her house caught fire and volunteers from the organisation provided crucial support to Eimear and her family as they were evacuated from the blaze.

“We were so lucky,” she said. “At first, we didn’t realise, then we smelled smoke and when we looked up-stairs the whole place was on fire.

“Even though it was New Year’s Eve, the Red Cross volunteers were still on duty – they came and helped us with clothes and blankets, hot drinks and toiletries, and sat out with us during the night.

“It was such a terrible thing to see our home burn down, but the way people showed such kindness was amazing, it made all the difference to me and my family.

“Now we are almost ready to move back in and I wanted to do something to raise some money and show how grateful we are.”

A newly qualified teacher, Eimear has put fundraising buckets around her town and also opened a JustGiving page where people can sponsor her and her friends’ keep-fit efforts.

British Red Cross senior community fundraiser for Northern Ireland Charlie King said: “It is fantastic to see Eimear and her friends organising something so different and fun to support Red Cross work.

“The communities where we work really are our life blood – both in terms of fundraising by people like Eimear and her friends and our volunteers who are drawn from the very communities they support, contributing countless hours so they can be there when people need them, even if it’s New Year’s Eve!

“This has been a very busy period for the British Red Cross and, during our coronavirus crisis response alone, we have reached more than two million people across the UK, providing food, medicines, emotional and wellbeing support, transport to and from hospital, as well as helping more than one million people receive vaccinations thanks to the efforts of 2,500 volunteers.”