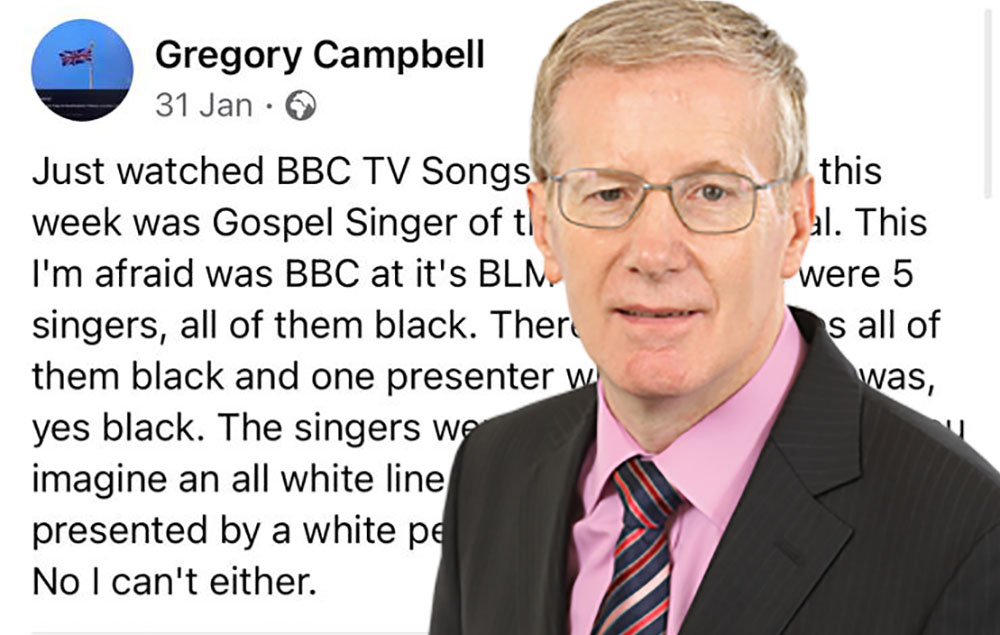 Fermanagh and Omagh District Council has voted to write to First Minister and Leader of the Democratic Unionist Party Arlene Foster, seeking action against her colleague Gregory Campbell MP, following his comments that all five finalists on the Songs of Praise ‘Gospel Singer of the Year’ were black.

Only the Democratic Unionists themselves voted against, with one declaring the debate a: “DUP bashing session”, before throwing down the gauntlet demanding Sinn Fein apologise for attending Bobby Storey’s funeral.

Members were discussing a Good Relations Audit report which highlighted the overarching aspect of “Everybody belongs”, when Councillor Anthony Feely, Sinn Fein said the community was “shocked and angered” by Mr Campbell’s remarks, and proposed writing to the DUP Leader.

Seconding, Councillor Emmet McAleer, Independent said: “The comments were actually quite disgusting. The MP in question has refused to apologise. It’s outrageous he is trying to stand by explicitly racist comments. It’s vitally important a unified message is sent out from this council.”

Councillor Donal O’Cofaigh felt the remarks were: “Way beyond acceptable and absolutely atrocious. Many members of the protestant community have said this doesn’t represent them. Maybe the DUP are haemorrhaging such support to the TUV that they are out-competing with this sort of rhetoric.”

“I was disappointed. The DUP Leader Arlene Foster, First Minister made it very clear that she did not share Gregory’s views either. It’s ironic when we are talking of Good Relations that a councillor would choose to attack my party in terms of our votes. We are not haemorrhaging votes or anything like that. It’s unfair these comments were allowed.”

Sinn Fein’s Councillor Chris McCaffrey said: “What was uttered was far, far less than acceptable, particularly for someone in elected office. We should expect nothing less than a full and honest apology for his frankly outrageous statements.”

Ulster Unionist Councillor Chris Smyth was “was completely gobsmacked” by the comments, while noting the issue had “strangely united” parties from across the spectrum.

The SDLP’s Councillor Adam Gannon said: “Gregory Campbell has a record of blatant discrimination in use of language. He has doubled down by refusing to apologise … As he is ignoring the public outcry, his party should go further and challenge him.”

An explosive situation occurred when Independent Councillor Eamon Keenan described the remarks as: “Outright racism. Just months before Edwin Poots described Covid as more prevalent in nationalist areas, so there’s also sectarianism in the highest ranks of this party.”

Councillor Erskine again cut in demanding off the Chair: “Is this a DUP bashing session? Can I just ask that question? You are nodding your head constantly.”

Cautioning Councillor Erskine against interrupting, the Chair added: “Councillor Keenan is entitled to his opinion. Please do not jump in or there will be a sanction. You will be muted.”

Councillor Bernice Swift, Independent said the discussion indicated: “Racism is alive and well, and in the chamber. It’s up to the DUP in how they deal with their party member who remains unrepentant.”

Concluding, Councillor Thompson criticised the proposal and the debate.

He asked: “Will Sinn Fein apologise for attending the funerals of Bobby Storey and others? I ask their leadership to apologise for the disrespectful remarks made by its members.”

While expressing regret, Councillor Thompson said his party would be voting against the proposal, which: “Was probably done deliberately.”

The proposal was carried by majority with no abstentions.