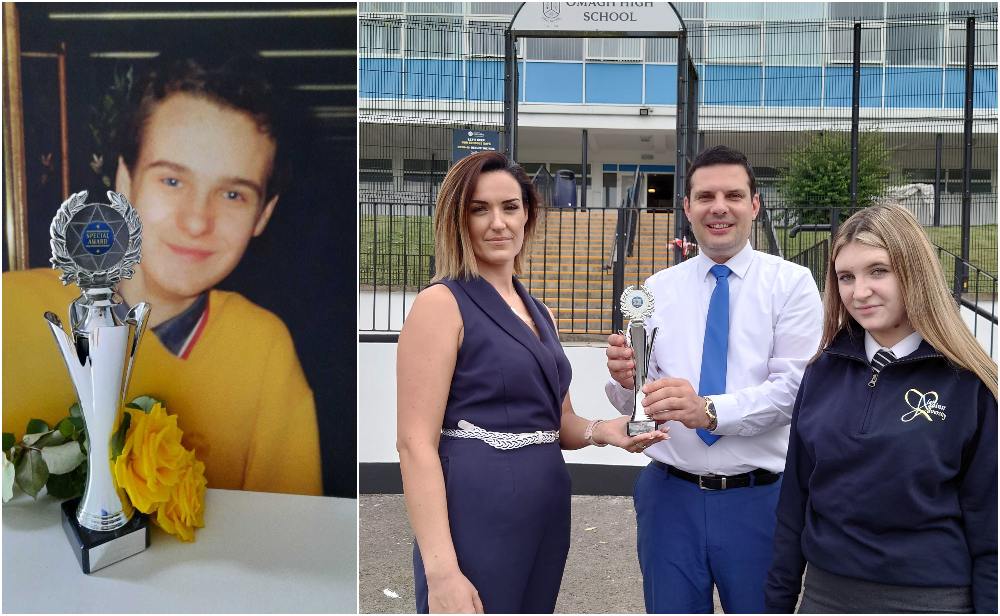 A picture of the late Alan Radford beside the award established in his name and right, Claire Monteith presents the award to Omagh High School principal Christos Gaitatzus

A Victim’s Advocate who lost her brother in the Omagh Bomb has established a foundation in his memory, to encourage and support people facing challenges.

Claire Monteith has driven the campaign for justice for all families bereaved by terrorist atrocities, not just that which robbed her much adored older brother Alan Radford of life.

Last Friday, 10 September 2021 would have been Alan’s 40th birthday. Instead it became a bittersweet day of remembrance but within that, the beginning of Alan’s official legacy.

Claire decided it was time to harness the vast positives from her brother’s all-too-short life, to inspire others struggling with challenges.

From that, ‘Alan Against Adversity’ was born.

She said: “Alan and I were very close and that doesn’t stop because his life was stolen away. Over the years of anger, frustration, grief, disbelief, disappointment and all the other awful experiences which come with such brutal tragedy, Alan’s strength of character kept me going. It’s that strength which needs to be reflected in others and seen for what it is.

“My beloved brother was brutally murdered on 15 August 1998 in our home town whilst shopping with our mother. Ironically, that day he was planning for his future at college and was going to open a new bank account.”

A student in Omagh High School, Alan was due to receive his GCSE results the following week, but never got to see them. Instead, Claire received them on his behalf.

“I was only one year below Alan, so I was starting my own GCSE year. Life has never been the same, not in school, not at home, nowhere.  He was a beautiful, kind, caring soul. He had a strong interest in history, particularly the Titanic legacy, and loved music, laughter and people – most of all his mother and family.”

To Claire, Alan was already her hero, not just as her big brother but in his selflessness, she eagerly watched him engage in.

“Alan was helping others from cleaning houses, babysitting, popping to the shops, cutting grass even though he had the worst hay-fever known to man. He was a model student with great manners and his radiance shone as did the good in his heart. Alan faced his own personal struggles including suffering bullying for being individual, not the stereotypical male teen. Despite all, he overcame adversity, continued on and simply never gave up. He didn’t turn him into something he wasn’t but stayed true to himself and his values and did not quit.

“Since Alan’s murder I too, as my family and many other innocent victims of terrorism, have faced adversity on a daily basis. I’m still here, giving it what I can. So to mark Alans 40th birthday and to honour his memory, I contacted the principal of our school with an idea of recognising those who are facing some adversity, no matter what it may be. These individuals deserve recognition, as much as academic progress. Life isn’t all about grades on paper but the core values as a person. Many youths in our social network are struggling, now more than ever. Life is much more complex. It’s harder to fit in somewhere and feel OK with just being you. Too many added pressures have resulted in many young lives lost to mental health issues.”

The ‘Alan Against Adversity’ award was formally handed over to Omagh High School and will be presented at this year’s prize giving ceremony.

Claire said: “It’s purpose is to honour and remember Alan, celebrate his life and acknowledge those who face challenges. This is the first step of the initiative which will develop into a wider arena”.

Omagh High School principal Christos Gaitatzis said: “Alan was in the last part of his academic studies he was tragically killed. He was a very helpful pupil and he worked hard to overcome his own challenges. Alan is commemorated on our memorial plaque and always remembered by the staff who knew him.”

Mr Gaitatzis added “As part of Omagh High School’s 60th anniversary, we have decided to introduce an award to commemorate Alan’s efforts through his life at our School and dedicate this award against adversity. The Prize Giving event presentation will take place in November 2021 and we will be delighted to welcome Alan’s family to present this award for the first time.”

Claire, expressed her appreciation to those who helped bring ‘Alan Against Adversity’ to life.

She said: “First and always, I thank Alan for being my guide throughout his short life, and being part of my being. My mother for bringing us life and setting an example of strength from within. To Mr Gaitatzus for taking this forward and to Mrs Quigley and Mrs Pauley. Also Jill Dillon from Unfiltered Apparel for her expertise with my sketch for the foundation logo.”

Claire concluded: “My hope remains to help where help is need in Alan’s honour, to fight for justice, truth and a better future for our next generation. No matter what, his heart will go on. Nothing and no-one can take that away from him.”