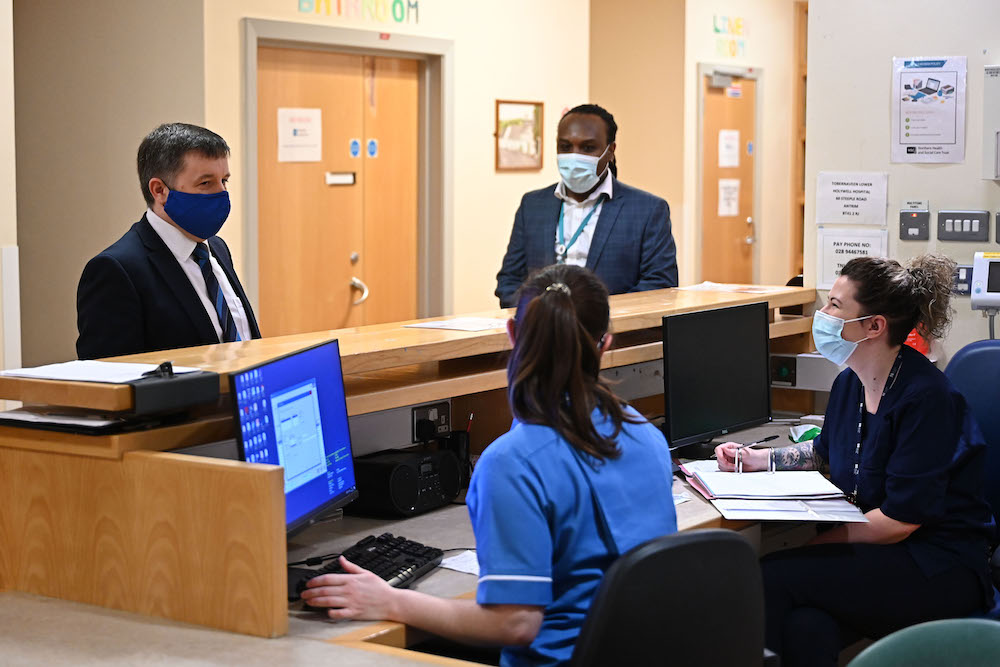 There have been five further Covid-related deaths reported by the Department of Health today (Monday).

All of these occurred in the last 24 hours – according to the official dashboard – which has the overall total now at 1,129.

There were a further 419 cases reported in that timeframe, with 51 in Armagh, Banbridge and Craigavon and a further 47 in Newry, Mourne and Down. There were 46 cases in Mid Ulster.

A total of 1,980 individuals were tested.

Fifty-one patients are in Craigavon – six more than yesterday. To date, 634 patients have been discharged from the Co. Armagh hospital.

The latest figures come as Dr Tom Black, the NI chairman of the British Medical Association, said the “logical decision” was to go into at least another four weeks of lockdown.

“I think it is certainly true that between now and the end of the month we will be announcing another lockdown, the question is when,” Dr Black told the BBC. “Do we do it proactively or do we wait until the figures are bad enough that we’ve no choice, I think that’s where we are at the moment.”

He added: “We have pragmatism, we have Christmas, we have politicians who want to be able to give Christmas to the public.

“There will be a balance there to be struck, between have we pushed our luck too far, do we need to step back and just bring in the lockdown that we would bring in at any other time of the year?

Elsewhere, Minister Swann has visited Holywell hospital to meet staff and show his appreciation to all Mental Health workforce in Northern Ireland.

Minister Swann said: “This pandemic has taken a massive physical toll on us all but it has also had a significant impact on emotional wellbeing and mental health among our community. That in turn has seen Mental Health teams working under significant strain. They have however responded magnificently and ensured that care and treatment have been available throughout the pandemic with minimum disruption.”

Mental Health services require a multi-disciplinary approach and consequently a wide variety of professionals are involved. These include doctors, nurses, social workers, psychologists, psychiatrists, counsellors, Allied Health Professionals, peer support, administrative and maintenance staff. There are also inpatient and community settings for care and treatment as well as those who work in the community and voluntary sector.

Minister Swann stated: “Although I am here in Holywell today I want to take this opportunity to extend my thanks to staff across all our Trusts the community and voluntary sector who work so diligently and selflessly to support those who have mental ill health.

“When I publish the 10 year mental health strategy next year it is important that it considers the voices of the workforce. This is a valuable opportunity for me to learn first-hand of their experiences.’’

During the course of his visit the Minister was able to meet with members of staff and visited a number of wards. He was also briefed on plans for the new Mental Health Facility at the hospital at the Antrim Area Hospital site which will provide 134 beds.