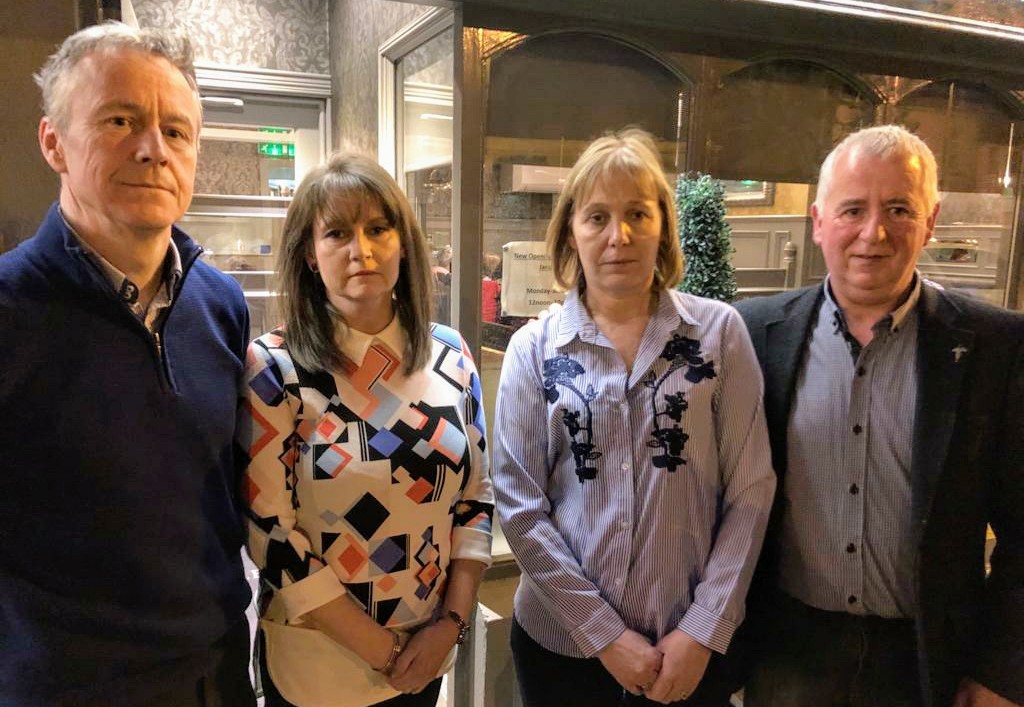 Peter and Niamh Dolan (left) with Liz and James McCarragher

Two families who united to campaign for stiffer penalties after losing teenage children to dangerous drivers, have welcomed a recommendation from the Minister for Justice to increase sentences.

The Dolan and McCarragher families met with Minister Naomi Long MLA today (Wednesday) and were moved by her determination in recommending the current sentencing of 14 years is uplifted to 20 years.

The meeting came following analysis of a consultation around a Sentencing Review document in which 88 per cent of the overall responses only commented on sentencing for driving offences causing death. The vast majority of respondents – over 98 per cent – supported an increase for the maximum sentence from 14 years to at least 20 years.

Peter and Niamh Dolan from Omagh lost their son Enda aged 18 and in his first term at Queen’s University in 2014. He was struck by driver David Stewart in Belfast who, high on drink and drugs, drove with the teenager on the roof of his van for about 800 yards before stopping.

He admitted the offences and was sentenced to seven years custody, later increased on appeal to nine years.

Lesley-Ann McCarragher from Armagh was 19 when she was killed while jogging on a Saturday afternoon in April 2016.

Uninsured and unlicensed driver Nathan Finn sped from the scene in the immediate aftermath, leaving his victim lying on the road. He hid the vehicle in a relative’s property, and later concocted a story of selling it on to two males.

Jailed for nine years, Finn successfully had his sentence cut by 12 months on appeal, leaving the McCarragher’s distraught.

There were notable similarities in the victims. Both were teenagers, had been head prefects at their schools and were in their first year at university. Both were also innocent victims of dangerous drivers whose actions caused fatal injuries.

Both were unlawfully killed.

Enda and Lesley-Ann’s families came together and harnessed their energies, determined to ensure other families receive justice, not only to see offenders appropriately charged but also to ensure there is adequate deterrent.

Peter Dolan, said: We had a positive meeting with the Minister and welcome the recommendation to increase the sentencing from 14 years to 20 years and also the changes to the disqualification period. The existing maximum sentence of 14 years never reflected the devastation and heartbreak caused to the families of the victims.

Lesley Monaghan – aunt of Lesley-Ann McCarragher and whom she was named after – said the family are greatly heartened by the Minister’s approach, and thanked her for taking the time to study concerns and explain the position.

Lesley-Ann’s parents, Liz and James commented: “We are very relieved by this and at last we feel we are being heard. As the Minister acknowledged, this will not help us or the Dolan family, but we can say we fought and pushed to ensure a chance.

“There has to be a broader recognition of the high level of risk caused by dangerous driving and associated offending and today we feel that has been acknowledged in part by the Minister’s approach. She explained matters clearly and while we will have go over everything discussed in more depth, the overarching issue was the sentencing increase.

“We are grateful the Minister listed to the voices of those who responded to the public consultation as well as us as families. We have some concerns over the length of time this is going to take legislatively but today a door has been opened at last which we always felt would remain firmly locked.”