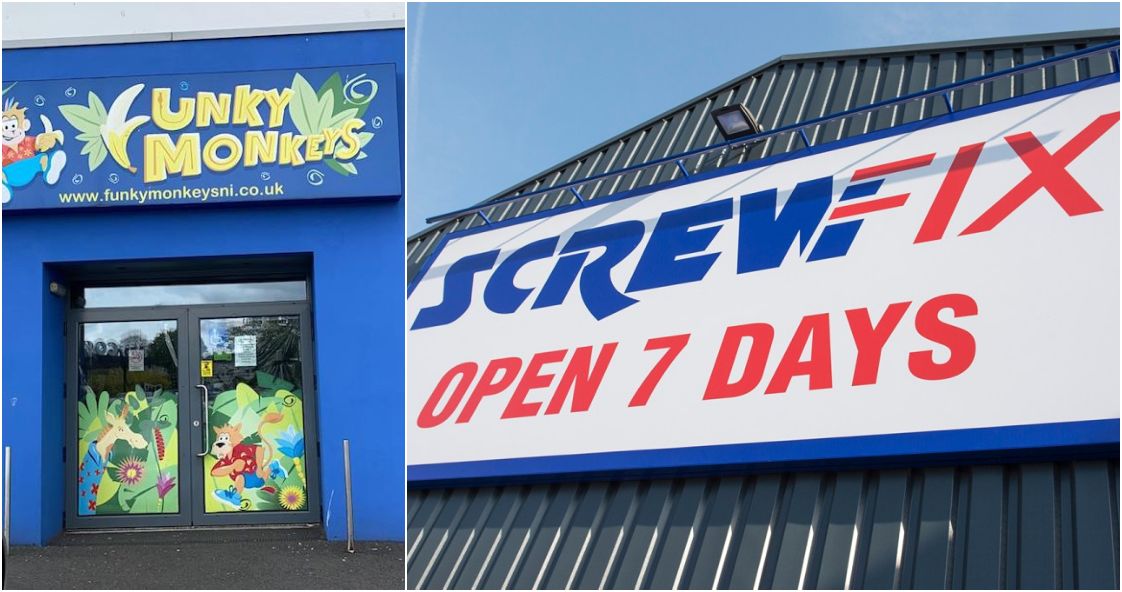 A new Screwfix store in Dungannon could see 12 new jobs on site, Tyrone I can reveal.

The multi-national trades and homes store is intending to move into the former Funky Monkeys unit in the town.

Tyrone I exclusively revealed plans for the new store on Monday.

It will be located at Unit 4 of the Oaks Centre, on the Oaks Road.

Two planning applications submitted to Mid-Ulster District Council seek permission for a change of use and external advertising needs.

The submission for change of use now reveals that the new unit will stretch to close to 5,000 sq ft.

And we can now reveal it will see 12 staff attend the premises daily when up and running, with architects’ drawings showing the inclusion of a staff room, safe room and canteen for their welfare.

Neighbouring properties – including Home Bargains and the Omniplex Cinema – have now been notified of the proposals.

Meanwhile, the applicant, Screwfix Direct Ltd, based in Yeovil in Somerset, is remaining tight-lipped ahead of actually securing approval.

When approached by Tyrone I, a spokesperson said: “As we continue to grow our store network we will announce details about each new store, including planned dates for opening, in due course.”

The proposed premises are described as a “vacant unit” which was further labelled as a “former indoor recreation centre”.

One of the applications relates to advertising outside the premises, to provide a banner sign with associated external lighting, a seasonal offer banner sign and five promotional safety poster signs. Opening hours would be displayed too.

This will be the company’s seventh outlet in Northern Ireland and second in County Tyrone, with another unit already trading in Omagh. It also has outlets at Newry, Lurgan and Lisburn, with two more in Belfast.

The company prides itself of stocking everything needed from house building to interior decorating, gardening, heating and plumbing, tools, and work and safety clothing and equipment, and much more besides, with tens of thousands of items to choose from and the ability to open up business accounts for tradespeople.

And it does so at greatly reduced prices, its UK-wide portfolio of over 700 stores allowing it to trade at vastly discounted rates.

The retailer has submitted applications to Mid-Ulster District Council for a change of use for “storage and distribution”.

Operating on an Argos-style system, it would also include a trade and counter sales area with “minor external alterations”.

The applications will be publicly advertised this week.