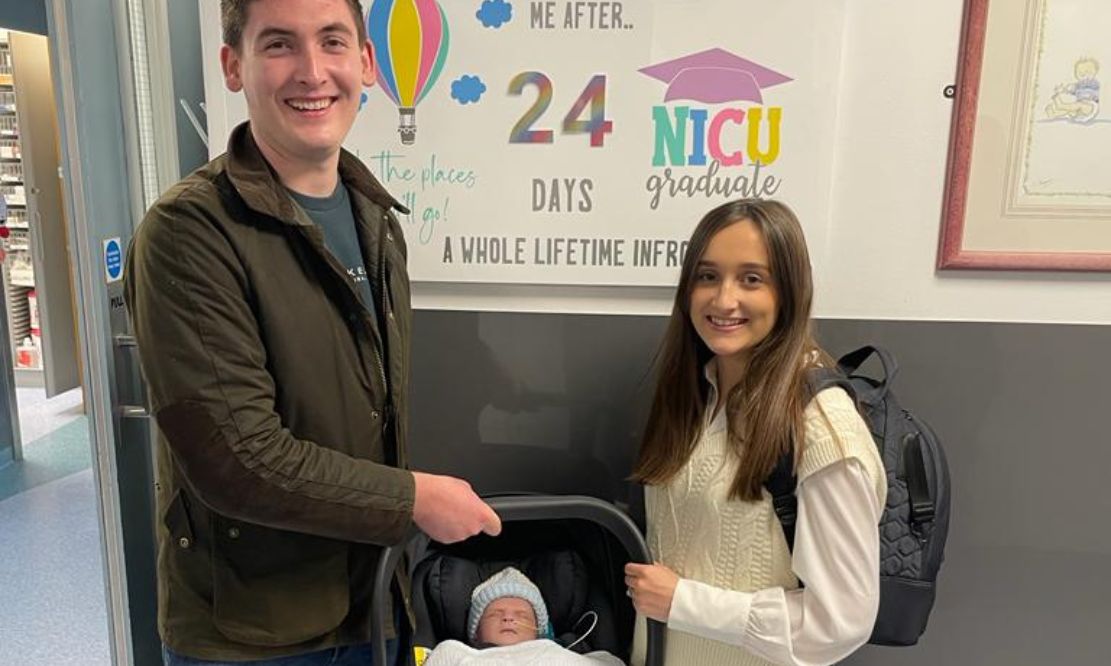 A child’s first birthday is always a cause for celebration and Augher’s little Leo Allen’s is no different, except, his parents also see his birthday as the perfect milestone for thanks-giving.

Leo was born on November 1, 2021 after nine months of normal, healthy pregnancy. His entry to the world was, unfortunately, much less straight forward. After being born via emergency C-section, physicians noted he was struggling to breathe and rushed him to the NICU.

The following weeks brought new and difficult challenges for the young family.

Leo’s mum, Kerry stated that, “everyday seemed to bring more bad news, they were discovering more problems and started talking about genetics and how all the problems had to be linked in some way”.

Leo was to remain in Craigavon Area Hospital’s Neonatal Unit for some time while practitioners determined the cause of his difficulties.

Eventually, after a multitude of tests and examinations a genetic specialist determined that Leo has an extremely rare chromosome disorder, so rare in fact, that it doesn’t technically have a name. What his parents Kerry and Daryl do know is that Leo has a deletion and a duplication on chromosome 5p. Leo’s symptoms range from developmental delay, low muscle tone, ear problems, kidney problems and heart problems with his main challenge being Laryngomalacia. As he breathes in, the tissue surrounding his airway closes over and causes him to have noisy breathing and results in him needing his feeds through an NG tube and an occasional oxygen supply.

Here, doctors discovered a laryngeal cleft, a slit at the back of the throat leading down into the lungs. This is an extremely rare occurrence with less than 1% of the population born with a laryngeal cleft. Understandably, this was an incredibly traumatic time for Leo and his parents but despite their own fears and concerns mum Kerry explained that the care in the PICU was “unreal” with nurses and doctors treating Leo with the utmost care and affection.

Speaking to Tyrone I, Kerry had this to say of Craigavon medical staff: “Leo started his journey in the Neo-natal unit at Craigavon Hospital and was treated so well there. It was such a hard time but the nurses treated him like he was one of their own”.

Now, Kerry and Daryl feel they have an opportunity to give back to those who have so tentatively cared for their precious son and who have helped bolster them in their hardest of times. Saturday November 5, just four days after Leo’s big first birthday, Kerry will be holding a coffee morning in Glenageerah Hall just outside Augher. Children are more than welcome to come along to help Leo celebrate and enjoy the soft play facilities while the adults mingle over a tea, coffee and bun.

Kerry’s aim is to raise as much money as possible in order to purchase much needed supplies and equipment for the Craigavon Area Hospital Neo-natal unit and Royal Belfast Sick Children’s PICU. Keen to express her gratitude to as many as possible, she stated, “if there is anything left over after I have given to Craigavon and the Royal, I would love to buy supplies for Craigavon’s Blossom sick children’s ward”.

If you aren’t able to make it on the day but would still like to donate, Kerry and Daryl have set up a just giving page which can be found here. All donations would be greatly appreciated and will be put towards buying essential equipment for these life-saving departments.