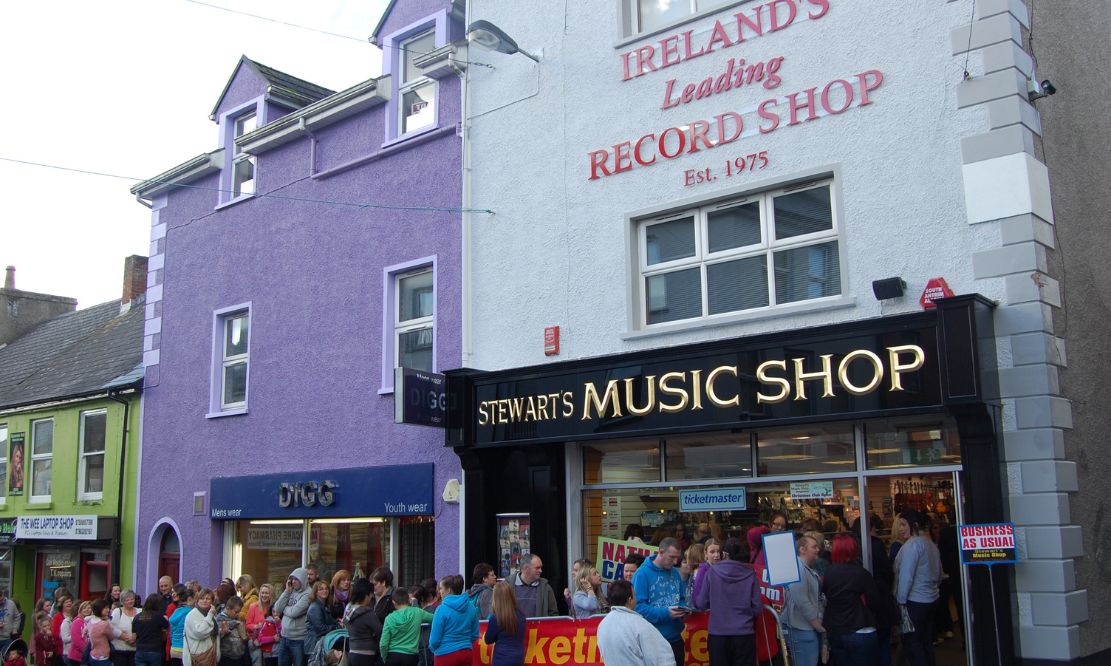 In 1975, 31-year-old acclaimed country music singer, known professionally as Gene Stuart, had just formed his own showband, The Homesteaders after a successful five-year career with the Mighty Avons.

1975 was also the year that Gene made the decision to share his passion with the people of his hometown as he opened a music shop on Irish Street in Dungannon.

This music shop – a physical representation of Gene’s vision and foresight – was to be his legacy. A newspaper cutting from the shop’s initial opening

Despite Gene’s unfortunate passing in 2016, the shop which celebrates its 47th birthday this Sunday (November 27), is still lovingly owned and managed by the Stewart family.

Once known as ‘Gene Stuart’s Record Shop’ the store now goes by the simple moniker ‘Stewart’s Music Shop’ and whilst, things have changed considerably over the last almost half a century, Gene’s brother Raymond who has worked in the store off and on since childhood, is delighted to see a return to some of the traditional modes of the 70’s. Speaking to Tyrone I Raymond said: “When Eugene opened the store he wanted a big focus on artist signings. We used to have, and still do have, people travelling from all over the country to attend signings with the stars.”

Back then we had lots of vinyl but four track and eight track cassettes were the new way to listen to music. We had a weekly Top 50 and every week we would listen to the charts and amend the Top 50 in line. It was all singles, though, people would just come in and ask for the number one in the charts or the number two for example”.

Vinyl is making a comeback though and I’m glad to see it. Vinyl has the best sound of the lot. It’s just a sweeter, cleaner, warmer, more beautiful sound. There is a certain customer for vinyl, though. You can’t get everything on it. It’s mostly the likes of Bruce Springsteen, The Beatles, Johnny Cash”. Raymond accredits his other brother Jimmy, who managed the store until his retirement in 2012, as being the one to “bring the business through tough times” constantly seeking ways to modernise and attract new clientele.

He said: “Jimmy had a calmness and coolness that helped keep the store a success. He was the one to introduce instruments and Hi-Fi, he also brought in the Ticketmaster machine and that all kept things alive.”

The instruments that Jimmy helped introduce remain a staple of the store today and range from guitars, to pianos and keyboards. This is one of the most special aspects of the store for Raymond, who says, “there’s nothing better than seeing a young musician starting out in their career coming into the store for their first violin at Christmas”.

I’ll never forget a wonderful moment last Christmas when a man approached the shop front with two little twin boys. They didn’t see me standing outside but one boy said to his dad, “what’s this place?” and his father simply replied: “This is a very special place. This is Gene Stuart’s Music Shop”.”