‘Dungannon is open for business’ despite extensive road works 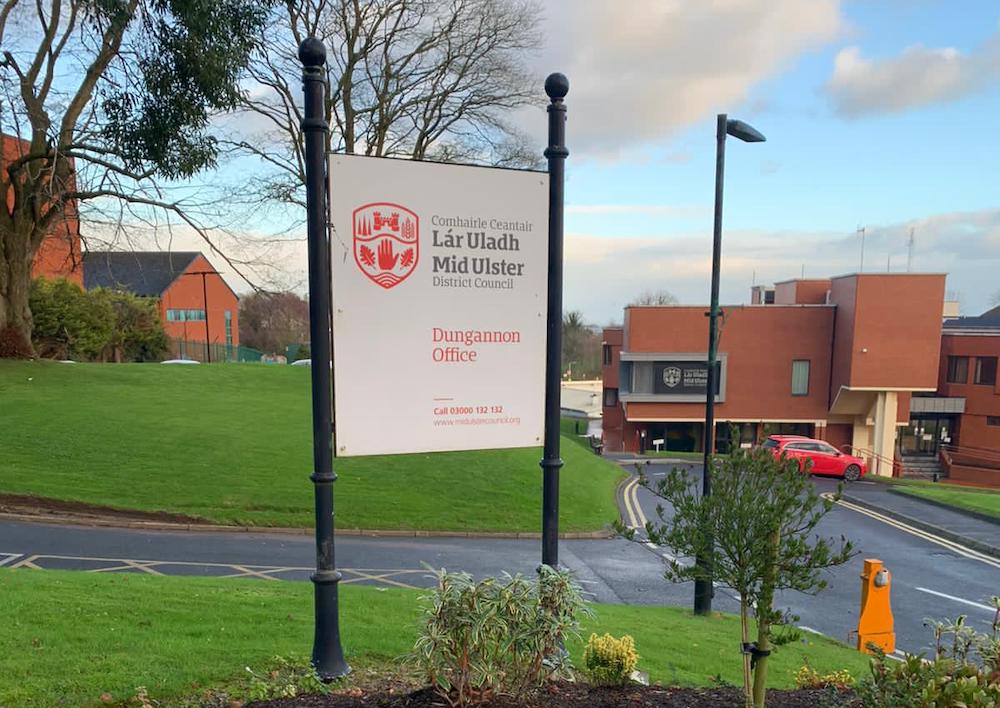 Dungannon councillors are to meet with DfI Roads in an attempt to tackle the roadwork problems currently impacting the town.

The matter was raised at a meeting of Council’s environment committee on Tuesday, October 12 by DUP councillor Clement Cuthbertson who said it is a pressing issue currently impacting on every trader, shopper and resident in the town.

“Since June, right up to today, virtually every approach road right round Dungannon has been dug up, filled in, dug up and filled in again, there seems to be work going on seven days a week,” sad Cllr Cuthbertson.

“There are a number of utility companies working at the same time and they appear to be competing with each other to get down the road the quickest.

“Alarmingly we are told there could be potentially another two utility companies coming to Dungannon so it appears there is no end in sight to this work.”

Cllr Cuthberston continued by noting traders in the town have a short window to ensure they can offer goods and services for use with the £100 high street voucher but told of how one person’s experience in the town ensured they will be using it elsewhere.

“One person contacted me last week after making several detours to get into Dungannon town centre. After navigating the roadworks, this person then received a parking ticket and has informed me that as a result, they will not be back in Dungannon to spend the £100 high street voucher when it arrives,” he said.

“This is a serious situation, it is a short time to the end of November and it’s an even shorter window from then until Christmas.

“I want to see Council’s senior officers get a grip of this. They need to speak to the Department for Infrastructure (DfI) and the utility companies, something needs to happen to ensure the message goes out that Dungannon is open for business.

“Dungannon traders, like others across Mid Ulster have suffered these past number of months and there are only 10 weeks to Christmas.”

UUP councillor Trevor Wilson said he had been contacted by a few people asking what had been done in Cookstown when it was suffering from a similar fate.

“One of the things we did was put signs up to say Cookstown was open for business,” said Cllr Wilson. “Listening to Cllr Cutherbertson that is the message that needs to go out for Dungannon as well.”

“It might not be as easy getting in and out of Dungannon as it was but I support what Cllr Cuthbertson is saying. It might be worth looking at what we had to do in Cookstown to mitigate the circumstances.”

Councillor Wesley Brown said he agreed with everything that had been said and asked if officers could ask utility companies to pause their work in the town until 2022.

“We should try to encourage as many people as possible to visit our town centres,” said Cllr Brown.

“Perhaps officers can advise if there is any way a moratorium can be put on the work being done by utility companies to keep it to after Christmas.”

A Council officer said it was “disappointing to hear this issue has arisen” and confirmed Council would seek to meet with DfI Roads to discuss the matter.

“Certainly in normal processes all this work has to be planned and scheduled with DfI to ensure there is free movement of traffic and that all arterial routes are kept clear at peak times,” said the officer.

“It is disconcerting to hear these comments tonight.

“We will reflect on what has been said and get an early workshop set up with Dungannon councillors and DfI Roads team.”