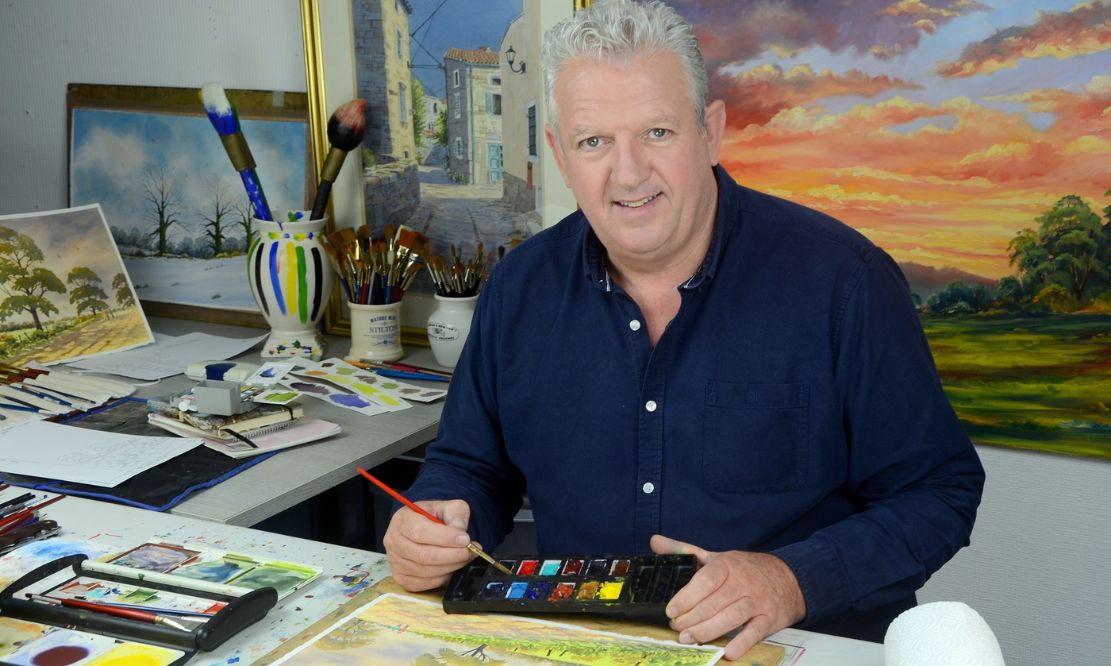 Parents, keen to provide quality pastimes for their children, are often the first to place the tools of craft into the idle hands of little children. Dermot Cavanagh’s mother was no different.

As a child, watercolour master Dermot Cavanagh’s hands became particularly idle, as he found himself confined indoors for some time due to illness. His mother, sensing his boredom and frustration, furnished him with a watercolour set and the rest – as they say – is history.

Totally self-taught, the Moy man explained that the lack of recorded art tutelage during his childhood meant that he was forced into the practice of good old ‘trial and error’ in his early days.

Speaking to Tyrone I, Dermot said: “There were no books or television shows depicting technique or instruction. I had to work it out myself. The landscape was always my inspiration, even as a young child. It was all I had at the time and I just practiced and honed the skill.

“It’s like anything!”, he quips: “If you start playing an instrument at, say, age seven by the time you’re in your twenties you’d like to be able to play a tune!”

Dermot had his first ‘one man exhibition’ at the Inn on the Park Hotel, Dungannon in 1986. Here, he showcased some 40 paintings and, seeing the interest of the public certifiably peaked, Dermot felt reassured that a hunger for his work existed and he continued for some time with annual exhibitions.

Today, exhibitions have fallen to the wayside, as Dermot now paints for galleries with his main gallery being Edenbane Art Gallery in Kilrea. Alongside his weekly three day ‘hands on’ teaching courses and package painting holidays, it’s safe to say that his hands are no longer idle! Dermot’s Moy Square, A Walk in the Snow

Talking about one of the highlights of his painting career, Dermot reflects on his hit BBC television ‘Awash With Colour’. The programme aired for 74 episodes across five years in the early 2000’s, where Dermot met with celebrity guests in various Irish beauty spots and – in a ‘learn to paint’ approach – Dermot taught celebrity and viewers alike.

When asked how the show came to be, he said: “I had an idea for TV and what would work as a show and so I went to the TV Festival de Cannes and pitched the idea to a production company!”

The show was a huge success and something Dermot is rightfully very proud of.

The world is Dermot’s oyster, in more ways than one. Yes, it is where he takes his inspiration from. The beautiful greens and blues of our stunning homeland landscape adorn many of his delicate works. But, Dermot explores the world artistically and physically.

His travels have taken him all over Europe through painting holidays that he has conducted for the last 20 years.

He said: “Covid put a stop to last year’s holidays but we are back up and running for this year. We are scheduled for three weeks in Croatia across May, June and September, Venice in March and then off to paint the Prosecco Road in Italy in September.” Dermot’s passion for paint has opened many a door and he is the first to say, “I enjoy what I do!”

He has, quite literally, painted a life for himself that would perhaps seem like little else than a heady dream to many a fledgling artist.

Dermot, however, encourages those with similar ambition to stay the course. His advice: “Equip yourself with good materials. Good materials produce good work. If you start with quality equipment it will give you a much better chance of getting what you want”.