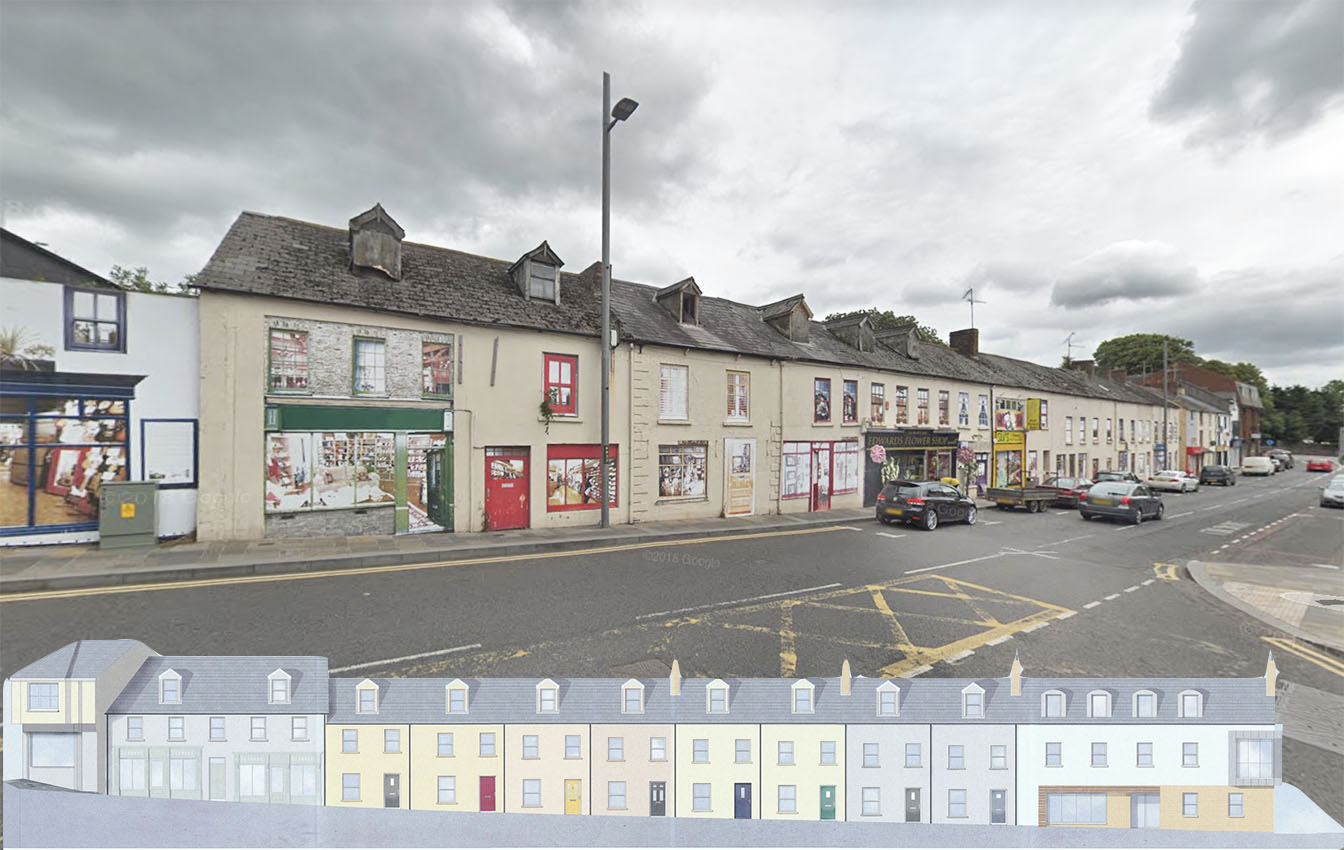 A contractor is being sought to construct a major mixed-use development in Dungannon, with Perry Street now set to be completely transformed as part of a multi-million pound project, Tyrone I can reveal.

The move to go out to tender comes six years after the proposals, designed to improve what many viewed as being a run-down area of the town, were first brought to the newly-formed Mid-Ulster District Council.

Three retail units – one of them described on papers as a “commercial landmark building” – form the backbone of the scheme, which falls within a designated Conseration Area.

But the development also includes substantial residential plans with the approval including permission for eight new townhouses and three apartments.

The scheme takes in one entire side of Perry Street, from number 4 to 36, with approval given back in 2018.

Castlehill Community Regeneration Group, which is comprised of members of the local Orange lodge, is behind the development which has just taken another major step forward.

The plan is to demolish the row of properties, which had been bought for £230,000.

When the proposals were drawn up, two of the units were occupied with the remainder described as being “vacant and in disrepair”.

According to the original papers submitted to council, Perry Street is regarded as “an important corridor within close proximity of Dungannon town centre”.

According to a design concept statement there is a pressing need for development at this location.

And the ‘landmark building’ as described has the potential for a “range of commercial activities to take place”.

The external and internal spaces of the terrace of eight townhouses have been “maximised to create a functional yet desirable living accommodation”.

An end block will comprise a range of commercial premises and apartments over two storeys.

The design statement reveals: “The aims and objectives of the proposal is ultimately to regenerate Perry Street. The existing condition of this site is extremely poor which is to the detriment of the overall street.

“The site between 4 and 36 Perry Street can be considered as a dead space in a very prominent position.

“The ambition of redeveloping this site will be of great benefit to the site, the street and the remaining town centre environment.

“The proposal seeks to create a new sense of vibrancy to Perry Street; the recreation of residential units will bring people closer to the town centre.

“Given the connections, these will be within walking distance to both commercial and educational hubs – a viable location for a broad range of potential end users. This will be of benefit to the Perry Street and town centre environments.

“Commercial activities will allow the development and Perry Street to become a well-utilised and active area – the potential of facilitating activity throughout the day will be possible through this development.

“All concepts have been considered with the historic nature of the area consistently considered and the design intention will be to sensitively integrate into the Dungannon Conservation Area.”

Castlehill Community Regeneration Group has now gone out to tender to find a contractor to see the plans through.

The estimated value of the contract, according to CIS, is £2.9 million, with the closing date for receipt of submissions by interested parties being Friday, February 5.

When a contractor is appointed, work should be ready to proceed later this year and would be expected to take up to three years to complete.