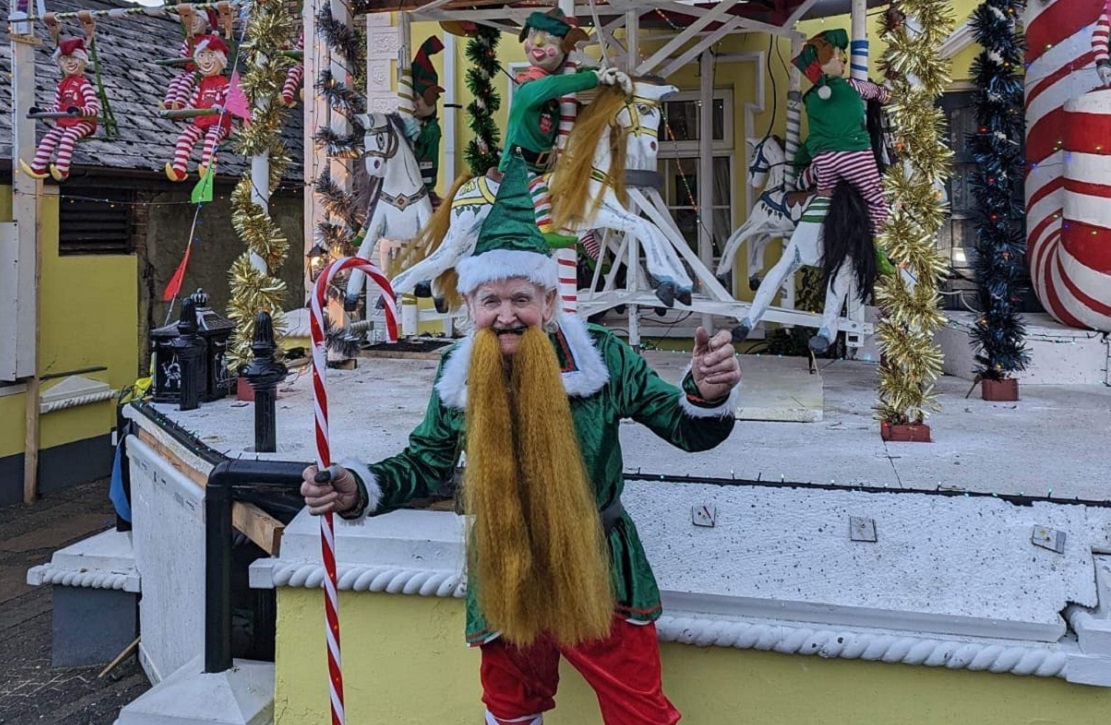 What started life 12 years ago as a simple Christmas decoration set in front of a living room window in Coalisland, has developed year on year into an incredible Carnival display with automated Christmas carousels and ferris wheels.

Frankie Gervin Sr, now 86 years of age, handcrafted the elf-adorned Christmas display that has caught the interest and imagination of people all over the world.

Made from hand-carved polystyrene and painstakingly painted, Frankie has been working on this year’s display every day, some days until midnight, since October 17, with each piece automated to incorporate movement with motors hidden underneath the platforms. Frankie Sr’s son, Frankie Jr told Tyrone I, “The effort Dad goes to is incredible. It has reached people all over the world and ABC News in America even picked it up. People love it”.

This year Frankie Sr has gone that one step further by donning an elf outfit that he had initially purchased for his elf mannequins! He has been out in person as ‘Santa’s Elf’ greeting passers by and entertaining starry-eyed children.

A joiner by trade, Frankie Sr left school at the age of 13 to work in his father’s chip shop. Frankie Jr explained that it wasn’t all plain sailing for his newly-employed father, stating, “He used to leave the chip shop part way through a day on the run up to Christmas to go off and make toys or presents for under privileged kids in the area.

“He would have got a clip ’round the ear for that! But he was always making things; rocking horses etc and giving them away. He has a wonderful imagination”. Several years ago, a young man from the local area asked Frankie Sr, “What will you have on your roof this year?” and Frankie quickly retorted, “A helicopter!”

The promise was made – and according to Frankie Jr – it had to be kept, he said: “My Dad said he just couldn’t let the boy down so off he went and made a near full size helicopter and together with the PSNI station next door we managed to organise a crane to lift it onto the rooftop”.

Frankie Jr continued: “It has got to the stage now where we just don’t know if it can get any better! Dad says though that it’s gone once he’s gone. For now, he just takes so much pleasure in seeing the enjoyment people get from it and the children’s faces when they go by”.

The Christmas display complete with music can be seen at Frankie Sr’s Home on Plater’s Hill near the centre of the town.