The death has occurred of Tony Devlin (Cookstown) 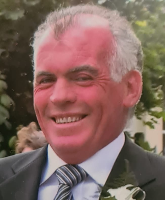 Tony’s remains will repose at 39 Westland Crescent, Cookstown. Funeral from there on Friday, 9th April at 11.30am for 12 noon Requiem Mass in Holy Trinity Church, Cookstown, burial afterwards in Forthill Cemetery. Tony’s funeral Mass can be viewed HERE

“St Anthony pray for him”.

Family flowers only, donations in lieu if desired directly to Charis Cancer Care