The death has occurred of Jim Raddie (Brocagh) 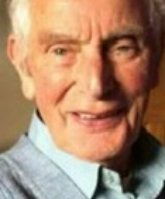 Raddie, Jim 10th Febuary 2021 (Brocagh/Ballymena) Beloved husband of the late Sarah, father of the late Kenny and father in law of the late Kathleen R.I.P His remains will be removed from his late residence for requiem mass and burial in St Brigids Brocagh on Friday. Deeply regretted by his sorrowing son Peter, daughters Patricia, Maureen, and Sheila, grandchildren, great grandchildren, sons in law and large family circle in Brocagh, Dundalk & Dunloy.

St Anthony and Mother Angeline intercede for him.

In adherence with current regulations, house, funeral and burial is strictly private.