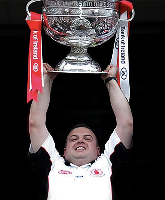 Mc Cann, Fergal, 8th March 2021. Deeply regretted by his loving wife Roisin, his daughters Aine & Aoife, Mother Maura and sister Lisa and entire family circle wish to express our sincere thanks to all who sympathised with and supported us through our recent sad bereavement. We thank all our kind friends and neighbours, who helped in so many ways; those who brought food, helped at the wake and all who sent Mass or Sympathy Cards, messages of support, telephoned, sent flowers and donated so generously to Clogher valley district care. Those who called at our home, to everyone who lined the route of the funeral cortege to the Chapel, and to all the football teams, schools and community groups who formed guards of honour. To all those who posted tributes on social media and newspaper articles. We acknowledge with special thanks to Clogher Valley District Nursing team who attended our home during Fergal’s illness, Consultants, Doctors and Nurses who looked after Fergal with such dignity and compassion in Altnagelvin Hospital during his illness, the staff of Errigal Medical Centre, Ballygawley for their assistance throughout Fergal’s illness especially Dr Breige McGarvey and Dr Victoria Armstrong who attended Fergal with diligent care and professional compassion, Marie Curie Nurses, James and staff at Valley Pharmacy for their help and support.

Fergal greatly appreciated video messages received from Tyrone players and St Macartan ladies whom he trained. Also visits he received from friends and neighbours during his illness. To Fergal’s employer Tyrone County Board and work colleagues for their dignified support during his illness and support during wake and funeral. A sincere word of thanks to Fr Peter McAnenly who celebrated Requiem Mass, and Canon Noel McGahan and Fr Leo Traynor for assisting at the mass and visiting our home during Fergal’s illness and continued support. To Musicians, especially Noleen Neill and family along with members of the parish choir Brendan Trainor and Liam McConnell and Donna McCaughey who provided such a beautiful and touching tribute to Fergal.

Thank you to all who participated in the mass helped carry up gifts, said reading, prayers of faithful and reflection. To all those who attended the funeral, stood outside the church and cemetery and joined us via facebook page. A special thankyou to all who helped arrange to have the Sam Maguire, Anglo Celt and ONeill cups present at the funeral. To Print Engine, Aughnacloy for their prompt and diligent service in preparing the mass booklet. Sincere gratitude to all who helped prepare and clean the church, and to Martin McKenna the contractor who helped make it possible to have Fergal’s Funeral at St Macartan’s church during renovations. A word of thanks to Paudge Quinn for the professional and dignified manner in carrying out Funeral arrangements. Thank you also to the grave digger. To Augher GFC for providing stewarding on day of funeral and liaising with the PSNI and undertaker. To Mairead McBride catering for lovely food provided. As it is impossible to thank everyone individually, please accept this acknowledgement as a token of our appreciation. The Holy Sacrifice of the Mass will be offered for your intentions.

Due to current covid regulations and restrictions in numbers Fergal’s mass will be restricted to family and friends only.

The mass can be viewed via live stream on “Parish of Clogher” Facebook Page.