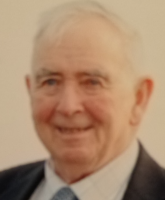 McElvogue. Winnie, Brendan, Annie, Eilish, Martin, Caroline, nephews & nieces and their partners would like to express their sincere and heartfelt gratitude to all the kind friends, neighbours, relatives and Community Groups who sympathised with and supported us during our recent bereavement.

We want to thank everyone who contacted us, provided food, sent Mass and Sympathy cards, letters, floral tributes and joined in the Requiem Mass via the parish webcam. Sincere thanks to those who stood along the funeral route to the Church and graveyard while respecting social distancing guidelines. Our sincere gratitude to Fr Hannigan for administering to Barney during his illness, for his spiritual support and for celebrating the Requiem Mass. Thanks to the sacristan, readers and all who took part in the Mass and the McElvogue Girls and Stephen who provided music during the Mass. To the florist who supplied flowers for the altar and wreaths. To Paudge Quinn, Funeral Director, for the efficient and dignified way in which the funeral arrangements were carried out and to those who prepared Barneys final resting place. To the DfI Roads Service including local representatives for arranging gritting of the roadways. A special word of thanks to the dedicated Care Workers and Staff of the Domiciliary Care Team of the Southern Trust who cared for Barney in his own home. Thanks also to the Staff of Ardmore Medical Practice, Medicare Pharmacy and District Nurses who attended to Barney.

As it is impossible to thank everyone individually please accept this acknowledgement as a token of our appreciation.

The Month’s Mind Mass will be on Friday 19th February at 10.00am and can be viewed live via the Church of the Assumption, Tullyallen webcam.