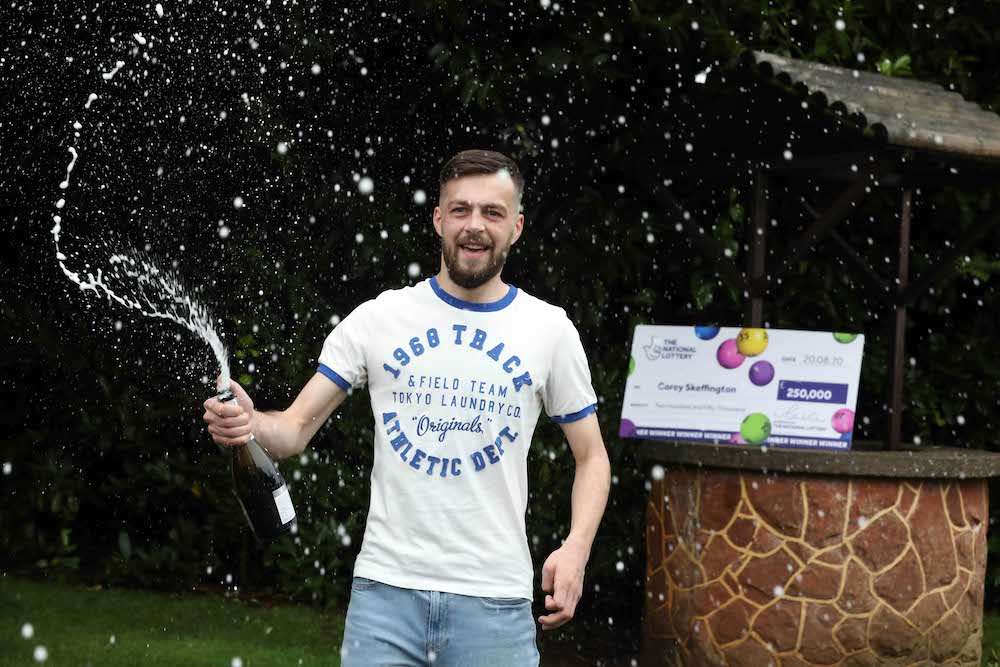 The National Lottery has today revealed some of its most goosebump-worthy winning moments – the instant players call and find out that they’ve just won an extraordinary prize.

And as the nation listens and imagines what their reaction would be if they were to win this Friday’s massive EuroMillions jackpot of £111M, research reveals that almost a third of players would immediately turn on the waterworks if they won.

The newly released selection of life-changing calls captures the moment when the players hear that yes, they have won big on The National Lottery. From whoops and cheers to the silence of utter disbelief, the calls give an exclusive look into the private moment winners’ dreams come true.

One Northern Ireland winner, Corey Skeffington (24) from Coalisland in County Tyrone, knows all about the emotions involved after winning £250,000 on a National Lottery Scratchcard one year ago.

“At first I didn’t say a word as I couldn’t believe what I was seeing,” recalls Corey.  “I just sat there staring at the Scratchcard and went as white as a sheet – so much so that my friends were actually asking me what was wrong.

“Then came the realisation stage and the cheering and jumping that comes with it before I called my aunt and my mum to break the news.  That’s when the emotion got the better of me and I cried my eyes out as I told them what had happened.

“That night, I was so restless that I just sat on the edge of the bed most of the night until I finally fell asleep – and it was like this for the next few days.”

Corey’s reactions are typical of how many National Lottery players imagine they would react if they were as lucky. The latest research shows that 35% of players said they would kiss their partner (35%), embark on a journey of jumping up and down (32%), scream at the top of their lungs (29%), or burst into tears (28%).

The nationwide poll of 1,500 players across GB and Northern Ireland revealed that players would share their good fortune, with a call to Mum being one of the first things many of us would do if our numbers came up (27%). And that’s before running around the house (25%) or having a good old dance to celebrate (19%).

“Unsurprisingly, we get to see a lot of happy people in our job, but their reactions certainly differ. Some people feel sick, some people jump up and down, some people are having a party when we arrive, others haven’t told a single soul – I’ve even had people fainting!

“I’ve been there with winners when they reveal to family and friends that they’ve won. That’s lovely as it’s a very private moment for them and you can see the genuine shock and delight on people’s faces.

“Winners tell me their emotions aren’t anything like they thought – I suppose you never know how you will react until you have to make that amazing call to Camelot. And who knows, the massive EuroMillions jackpot of £111M this Friday could provoke even more extreme emotions if a UK player were to win!”

But for all the tears and cheers, it seems there are still those who would fail to get carried away – believing that they’d turn to stone with the shock and would simply sit in silence while they let it sink in (18%) – as Corey did when he first saw that his Scratchcard was a winner.

“I’ll never forget making that phone call,” he said.  “After I had calmed down a little, I rang the National Lottery number on the back of the Scratchcard and spoke to a lovely lady who asked me to confirm my details.

“I couldn’t believe the words were leaving my mouth as I told her that I thought I’d won a quarter of a million pounds, and when she confirmed that I had indeed won, well… words can’t really describe that feeling. I hope lots of others in Northern Ireland get to experience it.”

You can listen to Corey’s call here.